National Public Radio presents several shows and podcasts of immense help in understanding issues of race, ethnicity, culture and identity, among the best being CODE SWITCH: Race and Identity Remixed.  This summer a dozen graduate students in my course Race, Ethnicity, and the American Experience chose a favorite Code Switch episode every week, and the list below begins with some of their picks.  By far the most picked episode is the first one on the list, the one about the indefensibility of cultural appropriation. 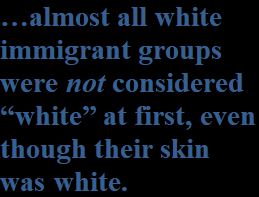 We all switch “codes”—that is, simply put, we know how to talk and act depending on the situation. You’re one way with your parents, for example, another way with your friends. Many also talk in “code,” so that your in-group understands fully, but outsiders—whoever those are—understand only partly, if at all. But for all minorities code switching grows more important—sometimes even becomes a matter of life and death—depending on their distance from being “white.”  “Whiteness” is still at the center of American culture, though the recent resurgence in White Supremacy groups indicates an historic shift in the centrality of whiteness, a shift that goes deeper than the election of Donald Trump as U.S. president.  He’s as much a symptom—though a very important symptom—as a cause of renewed racial hostility.  James Baldwin was more than 60 years ahead of the times when, in 1955, he wrote, “The world is white no longer, and it will never be white again.”  We’re in the midst of that shift now, and White Supremacists don’t like it, nor do they understand how much better things would be without their ideology.

American blacks still remain the furthest away from whiteness, but Noel Ignatiev’s seminal 1995 book How the Irish Became White showed brilliantly that almost all “white” immigrant groups weren’t considered “white” at first, even though their skin was “white.”  They had to become white through a series of assimilations and accommodations, many enormously aided by something people of color  will never have: white skin.  In addition, Baldwin and many other writers have analyzed how the history and atrocity of slavery weighs so much on the national psyche—creates so much deep national guilt—that assimilation and accommodation become that much harder, especially for blacks, as long as White Supremacy remains a central tenet of our culture.  When that changes, their will be more space for everyone…including whites.  I have said for years that the new frontier of race/ethnicity studies should be white studies. If whites understood how their ancestors also struggled against White Supremacy—how they had to fight for “white privilege”—that would do much to help change our country’s racism and free whites in many deep, deep ways.

NPR’s Code Switch will help us along the way to a more spacious, inclusive America.  And, as some of this summer’s students reported, Code Switch will be adding an “Ask Code Switch” feature where you can ask questions about race and ethnicity.  Read about that HERE. And check out the following links for some important reading and listening.

♦ Among NPR’s many other diversity programs is Parallels: One World, Many Stories, like this story about Feminist Film in India.

♦ Go to the Teaching Diversity page on this site.  For a very famous take on how White Supremacy works in every day life, see an article on “The Invisible Knapsack” by Peg McIntosh.