Eyes on the Prize: Reclaiming Our Civil Rights Heritage

From January 22-25, 1990, just as season two was getting underway, we held a conference at North Central College titled Eyes on the Prize: Reclaiming Our Civil Rights Heritage.   It’s director was then-college chaplain Rev. Barbara R. Isaacs, supported by a large number of students, faculty and staff, including me as coordinator of what we then called the Visiting Lecturer Committee.  It all began in late 1989 when Isaacs—often controversial due to what some believed were her radical views and stands on social justice issues—came into my office and said, “Don’t you think it’s time we tried reclaiming our Civil Rights heritage?”  Below is the brochure I designed for this conference.

The featured speakers were Juan Williams, who had written the companion volume for the PBS series, and two people who had played instrumental parts in the Mississippi struggle for Civil Rights all through the 1960’s.

The first was Shirley Harrington Watson, who later became a program administrator at the USDA, but in 1964 was one of the principals of a march that led to the detention of 1000 protesting students at the Jackson County Fairgrounds in Mississippi.  Her involvement ran even deeper and more personally.  She was a young person closely allied to the leader of Mississippi’s Civil Rights struggle, Medgar Evers.   “I felt, as a child, that I was responsible for his death,” Watson once said, “because I had asked him to get us some t-shirts [the] night [he was assassinated] and those t-shirts were actually under his arm.  The security people left him and he drove home by himself.  [His security] and my uncle would take turns going behind him with guns to make sure he got in and out safely, but that time he chose to go by himself…Really, it takes a lot to talk about it still.  I’m still a Post Traumatic Stress Disorder sufferer from the undeclared war on blacks in Mississippi.”

The other main speaker was Rev. Ed King, who in 1964 was the chaplain at historic Tougaloo College, a largely Black school.  He constantly stood with the Black community, thereby gaining the reputation as one of the few whites that the community really trusted. He tells the story that when the Civil Rights workers Goodman, Schwerner, and Chaney disappeared a black cafeteria worker at the college confided to him that a respected white woman in Philadelphia told her their bodies had been buried under a newly built dam but she didn’t know where. The white woman, fearing for her life, had sworn the cafeteria worker to secrecy. King brought the information to the FBI but they brushed him off until a few days later when the bodies were indeed found…under a new dam.

The conference included a tour of significant Civil Rights sites in Chicago and two panels focusing on the profound impact and participation of students in Civil Rights both in the 1960’s and what was then the present and near-future days, the 1990’s.

Now in the midst of a string of extraordinary events, from Trayvon Martin to Ferguson and Baltimore and Charleston, to Laquan McDonald in Chicago, etc. etc. etc., we also glimpse the future of Civil Rights in #blacklivesmatter and what may be a growing acknowledgment of the deep, pernicious presence of racism in our society.  There’s some dim hope that more and more Americans may be realizing that our Civil Rights heritage continues to need reclaiming every day.  The opening paragraph of the brochure below remains as pertinent today as in 1990:  “Led principally by Black Americans, with visible support from committed Whites, Hispanics, Asians, and other peoples from around the world, the Civil Rights Movement became one of the greatest struggles for human liberty and dignity in history. Now amid persistent, even growing racial and ethnic tensions, it becomes more important than ever to reclaim the heritage of this movement for today.  To realize what price was paid, to remember how people found common ground in the shared struggle for human rights, may help us renew our commitment to peace and equality, and realize anew the truth that no person is truly free until all persons are free.”

♦  Go to Cultural Events at North Central College: a Personal History for links to articles about major conferences and speakers, such as Maya Angelou, Dick Gregory, and the conference Christianity and the Holocaust.

♦  Go to the Teaching Diversity page for more writing on race issues. 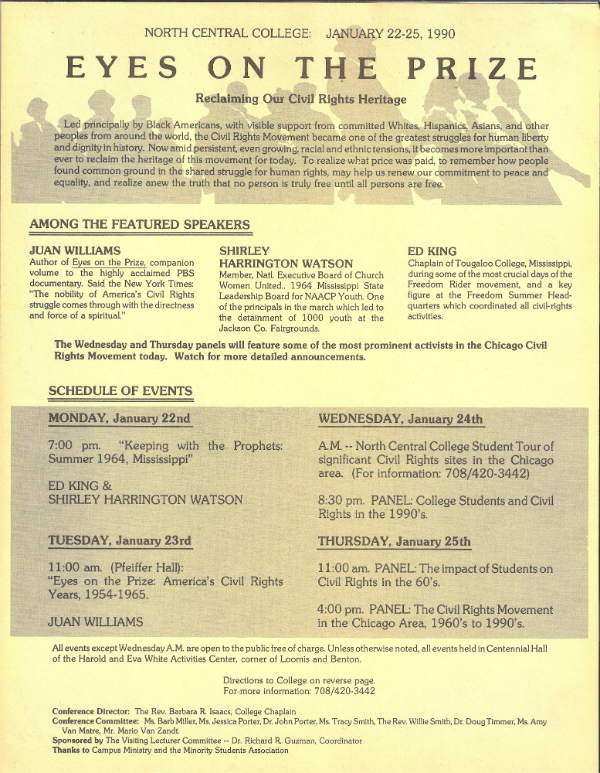