The following appeared recently as a featured story on North Central College’s website: 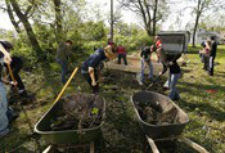 SIFE students and faculty and Lowe’s volunteers built several raised garden beds at a residential property in downtown Aurora on April 19. The property, called Emmanuel House, provides transitional housing and assistance to resettled refugees and immigrants from war-torn countries. New residents at the home joined volunteers in preparing the garden and will be involved in choosing types of produce for later planting.

Gerald Thalmann, a North Central faculty advisor for this project and associate professor of accounting, says students had the idea to do this service and educational project for the community. “SIFE college teams and Lowe’s often work together on community outreach projects, although this is Lowe’s first garden project. After talking with several different places about our idea, I decided Emmanuel House was the best fit. It’s a good organization and can directly benefit from the project.”

Once the garden is built, Thalmann says, it will be low maintenance and provide food for residents at the property, as well as residents at nearby homes operated by Emmanuel House. SIFE students will train the residents in all aspects of gardening, from using proper materials and planting to its financial and health benefits.

Overgrown with weeds, the space was cleared in preparation for setting eight raised beds, 4 by 12 feet, with new soil and fencing. The beds, says Neil Nicholson, also a faculty advisor on the project and assistant professor of mathematics, help keep rabbits at bay and create a new space for healthy soil.

“Lowe’s employees were on site April 19 to deliver the soil and materials and help with manpower to build the garden,” Nicholson says. “We set up rain barrels for irrigation and composting bins and have already started nearly 100 seedlings for tomatoes, broccoli, bell peppers and jalapeños off site.”

Various areas of North Central’s campus community have been involved in the project, too. The sustainability coordinator advised students that using nontreated wood was a must in creating an organic garden. The campus gardener helped set up the space to enhance the property and suggested different ways to grow a variety of vegetables and herbs. Members of the maintenance staff built grow stands so many seedlings could be planted. And, because North Central College has its own community garden on campus, many garden-friendly faculty and students will be helping, too.
Students have created a Facebook page at facebook.com/NccSifeGarden with details about the project and will develop educational materials for current and future residents at the property.

“We hoped our students would get as much out of this effort as those we’re partnering with at Emmanuel House,” says Nicholson. Thalmann, who loves gardening, agrees and is eager to share with others the values of becoming more self-sustainable with food and gardening and in giving back to the community.

Lowe’s Charitable and Educational Foundation provided a grant to help cover related costs for materials for the garden project.

North Central College’s award-winning SIFE chapter was established in 1987 to educate others how the free enterprise system works. Projects have evolved over the

years based on the interest of students and faculty and needs in the environment, but all have stayed true to the original mission of including a social justice component. Projects have ranged from helping entrepreneurs from the United States and around the world become economically self-sustainable to teaching refugee families how the U.S. financial system works to educating high school students on the basics of running a business. SIFE has also developed its own business known as NCC’s Best, which has transformed into a free and direct trade business promoting wares produced in seven countries by entrepreneurs striving to make the free enterprise system work.

Emmanuel House CDC, formerly Bryan House Community Development Corporation, is a nonprofit organization dedicated to helping refugee families from around the world save and work their way out of poverty in a responsible and dignified manner. It operates several locations, apartments and homes, that function the same way. Families pay regular rent—the majority of which goes into their own down-payment fund, helping them buy their first home. Emmanuel House is uncompromising in its commitment to work with refugees, immigrants and everyday working-class poor, regardless of race, ethnicity, religion or creed. For more information visit emmanuelhouse.org.

Founded in 1957, Lowe’s Charitable and Educational Foundation has a long and proud history of improving the communities it serves. It funds nonprofit organizations and public agencies that support its charitable goals. The foundation’s primary philanthropic focus centers on K–12 public education and community improvement. Within these areas, Lowe’s Foundation is committed to supporting projects that have the greatest impact on communities and align with its core business—home improvement.

♦  In 2016 Emmanuel House was named one of the “TOP 100” social change organizations in the world.  RETURN to Emmanuel House / Bryan House main page.

♦  VIDEOS:  Watch a video on Service at North Central College, the middle third of which tells about starting the garden.  A  Cornerstone Day at North Central College, the last third of which focuses on college president Troy Hammond’s call for a time of service at the Emmanuel House to work on the garden started by SIFE/Enactus.  Also, go Here to see a music video about that same time.