Posted on November 2, 2016 by Richard Guzman

The statistics are hard to believe:  70% of Americans overweight or obese, adult obesity doubling between 1980 and 2008, but tripling for kids, so that today a third of U.S. kids are overweight or obese.  This in an era where health information abounds, an era of gyms, Fitbits, high tech apps.  We’re so sophisticated it’s easy to overlook simpler solutions.  I’ve heard, for example, that if you want to help kids with their weight one of the best things to do is teach them to grow their food: teach them to garden.  During WWII U.S. diets were, overall, among the healthiest in our history because we had less sugar and fat around—these were reserved for our soldiers—and because so many, also as part of the war effort, gardened.  “Victory Gardens” we called them. 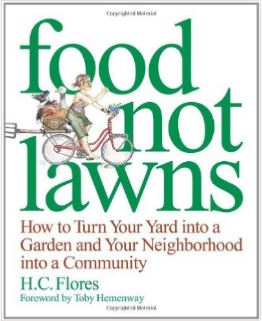 This post focuses on the work of Jenette Sturges, a graduate student of mine in several courses starting in 2011 through her finished masters thesis in 2015, a thesis titled “El Jardin: Community Gardens as a Space for Organizing.”  It started with a $10,600 grant she received for a project in my 2012 Professional and Grant Writing Course (see the link below).  With that money she started a community garden, eventually four of them. Early in her thesis she writes:

“The idea of communal work is a foreign concept for most Americans, who have grown up in a culture that values individualism, a value rooted in consumerism. Communal agriculture has historically served as an aggressive advance along several fronts—a revolt against the privatization of land, a rejection of mass corporate food production in favor of the small scale neighborhood farmer, a rethinking of capitalism and profits at the expense of the long term viability of sustaining life on earth. That is what makes community gardening—when done without markers and plots and chicken wire and rent on the land—a subversive activity.

“El Jardín did not begin that way. It began as a municipal government-sponsored project, funded by county government designed to address the causes of childhood obesity, with the idea that a garden might be a space to feed healthy foods to some of the poorest residents of Aurora, and in turn, the poorest residents in all of Kane County. 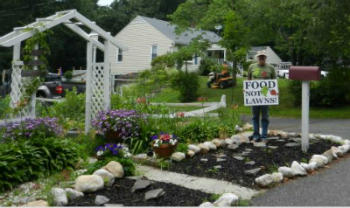 “But El Jardín did not truly flourish until three years later, when a team of dedicated and like-minded individuals came together with a greater vision for the garden as more than just a place to grow vegetables. They re-imagined the garden as a tool and a space for growing a community of residents capable of organizing and advocating for their own needs, improving their own community from the inside-out rather than relying on the outside-in forces of government or gentrification. In short, my project, El Jardín, has transformed from a government-operated PR project to an outdoor classroom operated by radicals for the purposes of organizing the people, and it demonstrates the power of gardens as spaces for organizing.

“The original inspiration for El Jardín came from a book called Food Not Lawns, by H.C. Flores, which encourages readers to tear up their grass in favor of growing edible plants using a permaculture practice called paradise gardening. The book, which first gave me the idea to strip my tiny front yard of its grass and turn it into a strawberry patch, may sound innocent enough, but fellow guerrilla gardeners know this is not the case.” 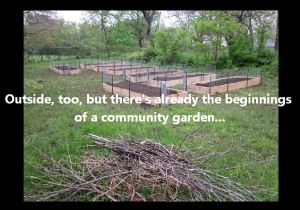 Still from a video on EMMANUEL HOUSE.

She also quotes from Toby Hemenway’s forward to the Flores book:  “Food Not Lawns is a radical book. I write that with some irony, because the simple suggestions and techniques that Heather Flores offers—grow a garden, talk to neighbors, and try to notice the consequences of our actions—would have been plain common sense to our forebears of just two or three generations ago. But today, when saving a seed can result in a lawsuit, catching water from your roof risks fines from the health department, and a gardening workshop in Sacramento ends in arrests for terrorism, small acts of self-reliance require not merely courage, but unusual vision and persistence in the face of a deeply apathetic culture.”

Though focused on healthy food, gardening goes far beyond food.  It lets us know that to combat obesity we’ll need to go back not only to practices like gardening, but to mindsets—to world views—that make connection to the earth and connection to community more important than connection to all the trends that have made us, in this era of health consciousness, as unhealthy as we are.

♦  Go HERE to see Jenette Sturges’ community garden grant proposal.  Note:  The first 5 pages are the proposal application guidelines from the granting organization.  Out of habit I marked a sentence or two on p. 2!  Sturges’ actual grant starts on p. 6, and for some reason, everything she writes came across underlined.

♦  The Emmanuel House link in the caption above takes you to an article on the SIFE/Enactus garden project.  It contains more links to videos about that project done at an Emmanuel House site.  The picture is a still from a video chronicling Senator Dick Durbin’s visit to that site in 2012.  In 2016 Emmanuel House was named one of the “Top 100” social change organizations in the world.