How Good of a Democracy Are We Anyway? 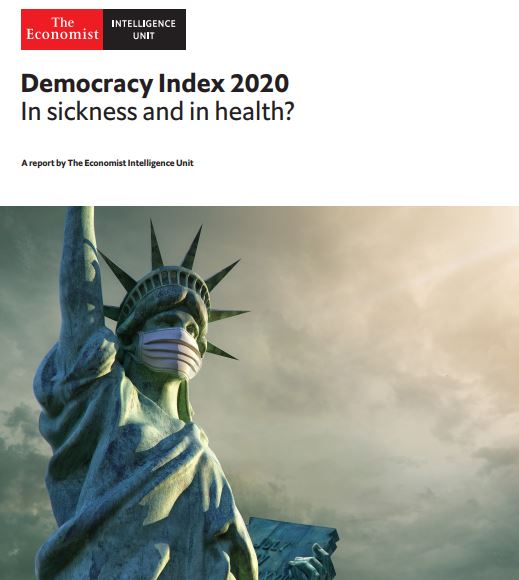 This post presents highlights from The Economist Intelligence Unit’s (EUI) Democracy Index 2020, its 13th annual index which began in 2006 and surveys the health of democracy around world.

Before diving in for more background and detail, I’ll cut to the chase and say the U.S. isn’t at the top of the list when it comes to healthy democracies.  It isn’t even in the Full Democracy category.  It’s the second country in the Flawed Democracy category and comes in at #25 overall.  You can see the whole Index 2020 HERE, including the rankings chart on pages 8 to 13.  By the way, Norway ranks #1 with an overall Democracy Score of 9.81 out of 10.  North Korean, at #167, is dead last with a 1.08 score.  The U.S. score is 7.92.

Hey, I’m just reporting.  And let’s can the “America, Love it of leave it” attitude.  It’s always good to take as objective a look at yourself as possible.  Americans are heavily inclined to think of themselves as the greatest, and this perspective is so strong it’s a doctrine with a name: American Exceptionalism.  And we are exceptional and the greatest in many positive respects, but not all.  Which is why, for example, we incarcerate more people than anyone in the world, why racism—a problem in many countries, of course—remains so stubbornly entrenched here, and why with less than 5% of the world’s population, the U.S. has accounted for more than 20% of global deaths during this pandemic.  No one’s saying they don’t love America, just that we can do better.  Part of doing better is putting that exceptionalism attitude in its place.  When you think you’re pretty close to perfect, that lessens the drive to fix things that need fixing.  Looking seriously at the 2020 Index might be a good form of tough love.

The Economist is a weekly newspaper head-quartered in London and printed in magazine format.  It began in 1843 and styles itself as “a global thought leader but [not] part of the establishment.” It’s audience (in the millions) “is guided by our objectivity and insight on issues as wide-ranging as cryptocurrencies to gay marriage,” it says of itself.  And, indeed, most, if not all, organizations tracking media bias rate The Economist very high in unbiased, factual reporting.  The Economist Intelligence Unit (The EIU), which produces the Democracy Index report, is the research and analysis division of The Economist Group, the sister company to The Economist. Created in 1946, it has over 70 years’ experience helping businesses, financial firms and governments understand how the world is changing and how that creates opportunities to be seized and risks to be managed.

The Democracy Index focuses on five categories: electoral process and pluralism, the functioning of government, political participation, political culture, and civil liberties. Based on its scores on a range of indicators within these categories, each country is then itself classified as one of four types mentioned above: Full, Flawed, Hybrid, or Authoritarian. A large, 18-page Appendix details the definitions, the resources, and the methodology the EIU uses to arrive at its rankings. The main focus of the 2020 report is the impact of the coronavirus pandemic on democracy and freedom around the world, as well as the state of U.S. democracy after a tumultuous year dominated by the pandemic, the Black Lives Matter movement, and a hotly contested presidential election deeply.

Among the report’s highlight findings are that:

♣  There’s been a shift eastward, towards Asia, in the global balance of power
♣  U.S. democracy continues to be under pressure from rising polarization and declining social cohesion
♣  The biggest democracy winner is Taiwan
♣  Mali and Togo are the biggest losers in a dire year for African democracy
♣  Western Europe loses two “full democracies” (France and Portugal)
♣  Democratic backsliding continues under the cover of Covid-19 in Eastern Europe and Latin America
♣   The Middle East and North Africa retain the lowest democracy index score, while North America (in large part because of Canada) retain the highest score.

On the Covid-19 pandemic, the focus of the 2020 Index, there was deep criticism of its handling and “big downgrades of Index scores for civil liberties and functioning of government.”  One key paragraph was this:  “Was there another way? There was no obvious alternative to the social distancing, quarantining and lockdown policies pursued

by governments and, in itself, this did not signal a turn towards authoritarianism in the world’s democracies. However, governments’ approach to the management of the pandemic did reveal a dismissive attitude towards the idea of popular participation and engagement with the single most important issue of the day. Even though they were pressed for time while tackling an urgent public health catastrophe, governments could have treated the public like grown-ups and asked for their consent and involvement in combating the coronavirus epidemic.”

Of the U.S. in particular, though race and the Black Lives Matter movement gained early mention, there was little more devoted directly to these, a disappointing omission in my view. The focus, instead, was on our country’s tremendous polarization.  Has race, a perennial U.S. sore point, exacerbated our polarization, or is it bringing a strange and surprising kind of unity?  Certainly, the rise of white supremacists groups would indicate a further shredding of our social fabric, yet there is significant social backlash against such groups, especially after the January 6th storming of the U.S. Capitol, and more and more people seem to want to face racism, white privilege, and systemic racism in a more serious way than perhaps any other time in U.S. history.  Still, it’s understandable that our spectacular polarization should garner the Index’s most aggressive statements.  For example:  “Despite…positive developments, the US’s overall performance is held back by a number of weaknesses, including extremely low levels of trust in institutions and political parties; deep dysfunction in the functioning of government; increasing threats to freedom of expression; and a degree of societal polarisation that makes consensus on any issue almost impossible to achieve….While pluralism and competing alternatives are essential for a functioning democracy, differences of opinion in the US have hardened into political sectarianism and institutional gridlock. This trend has long compromised the functioning of government, and the US score for this category fell to a new low of 6.79 in 2020.

“More worrying, public trust in the democratic process was dealt a further blow in 2020 by the refusal of the outgoing president to accept the election result. Mr Trump and his allies continued to allege voter fraud long after the election was over, without producing reasonable evidence to substantiate their claims and in the face of court rulings finding against them. Through his unfounded allegations and intemperate language, Mr Trump called into question the reliability of the democratic process and further undermined public faith in democracy.”

♦  A link to the Democracy Index 2019 is in my article “Voter Suppression 21st Century Style.”