Posted on September 5, 2013 by Richard Guzman

I gave a version of this essay as a talk at a philosophy & religion conference in Kolkata, India, August 2002.  Re-reading some literary criticism I had published 20 years earlier in the Virginia Quarterly, I sought to apply new ideas about Indian novelist Raja Rao to crucial issues of politics and multiculturalism then brewing in India.

My fascination with India began in my early teens just a few years before the Beatles made it fashionable.  The Civil Rights movement had drawn our attention to Gandhi, and I also loved Tagore.  One of the first books I bought just for myself in college was the Tagore Reader, for which I paid $1.50 at Moe’s, the most famous used bookstore in Berkeley, California.  But my deepest engagement with India came in the early 70’s when I began reading the novels of Raja Rao, one of India’s greatest writers.  Today I want to re-read him, to re-see him in the light of different concerns.  This paper works with a relatively small body of material and has modest internal aims, but its larger purpose is to call scholars and practitioners of religion and philosophy, and the arts and humanities in general, to find as many ways as possible to re-vision and re-articulate the concept of purity to prevent what amounts to the hijacking of religion and philosophy for extremist, socio-political ends. As matters stand now, the concept of purity seems to be one of the major components in religion and philosophy that attracts extremists, produces extremism, and makes us prone to various forms of violence in the name of the sacred.  These ideas have been well covered by such philosophers as Rene Girard in books like Violence and the Sacred.   “At the heart of Western philosophical thought,” writes Robert Switzer, “…one finds a profound desire to reject, or be purified from, the flesh.”  And even when a political ideology seeks to supersede, even crush, religion, it often borrows conceptual and rhetorical devices of purity from religion to justify horrific means towards inhumane, “pure” ends.  The Khmer Rouge’s “Communism” in Cambodia, Milosevic’s ethnic cleansing in Kosavo, Hitler’s Aryan fantasies—these are only a few of the monumental tragedies of history driven by various concepts of purity.  Today we have battles in the West Bank, in Gujarat, in Belfast, and what is often casted as a titanic East-West clash surrounding the events of September 11th.  I believe one necessary thing, of many necessary things, to help stop this violence is to move away from the concept of purity as total purity and even towards a kind of “impure” religion and philosophy which features a more completely conceived interconnection between pure and impure.  I will use a re-reading of Raja Rao as a metaphor to suggest what such an interconnection might be.

When I read and wrote about Raja Rao twenty years ago, I was swept along first by the genius of his style.  I had become interested in the relationship of style to nationalism.  How would writers from Nigeria, or the Philippines, or India use the English language?  Would they merely write the “King’s English?”  Indeed, it seemed like most writers were simply adopting English with few significant changes.  There were startling exceptions: Amos Tutuola in Nigeria, and N.V.M. Gonzalez in the Philippines, for example.  And their was Rao.  In the preface to his first novel Kanthapura he wrote:

…English is not really an alien language to us.  It is the language or our intellectual make-up–like Sanskrit or Persian was before–but not our emotional make-up…We cannot write like the English.  We should not.  We cannot write only as Indians.  We have grown to look at the large world as a part of us.  Our method of expression therefore has to be a dialect which will someday prove to be as distinctive and colorful as the Irish or American….

This 1937 preface is, to my knowledge, the first major statement on literary style in the “Third World,” and, as critic Robert J. Ray said, Rao’s craft became “the most profound in the history of Indo-Anglian literature, perhaps in the history of contemporary literature.”  Few in literature have also spent more time discoursing on the relationship of mysticism and reason, and the differences between East and West.  I once asked Raja Rao why he loved French culture so much, since its super-rationalism seemed to conflict with India’s mystical bent.  He said the French loved rationalism so much that for them it became mystical. I concluded that the obverse was true for India: that it loved the mystical so much that it became reasonable.  Rao believed India understood reason and mysticism as merely different manifestations of the same thing, but that the West, even in France, compulsively kept them apart.  This oneness was part of what he referred to as the “metaphysic of India.”  The main character in his novel The Serpent and the Rope, says: “Anybody can have the geographic—even the political—India; it matters little…India is not a country like France is, or like England; India is an idea, a metaphysic.”

The key to this metaphysic, for Rao as for many others, is perhaps the central text of Hinduism: Tat tvam asi, Thou art that (Chandogya Upanishad).  The main character of The Serpent and the Rope says: “Seeing oneself is what we always seek; the world, as the great sage Sankara said, is like a city seen in a mirror.”  The world, that is, is the self seen as the other.  This is the vision, the wisdom, of the sage.  India produces sages.  The West, geared towards heroes, produces saints.  That is, it produces people who, not understanding that the world is but the self seen as the other, live to impose their will upon the world instead of accepting what is.  This is perhaps the central passage of The Serpent and the Rope, its main character Rama saying:

“The world is either unreal or real–the serpent or the rope.  There is no in-between-the-two–and all that’s in-between is poetry, is sainthood.  You might go on saying all the time, ‘No, no, it’s the rope,’ and stand in the serpent.  And looking at the rope from the serpent is to see paradise, saints, gods, heroes, universes…you feel you are the serpent—you are—the rope is.  But in true fact, with whatever eyes you see there is no serpent, there never was a serpent.  You gave your own eyes to the falling evening and cried ‘Ayyo! Oh!  It’s the serpent!’  You roll and lament…One–The Guru–brings you the lantern…’It’s only the rope.’  He shows it to you.  And you touch your eyes and know there never was a serpent.  Where was it, I ask you?  The poet who saw the rope as a serpent became the serpent, and so the saint…The actual, the real has no name.  The rope is no rope to itself.”  “Then what is it?”   “The rope.  Not opposed to the serpent, but the rope just is—and therefore there is no world.”

I hope this gives you a little flavor of Raja Rao’s style, and, in particular, a sense of what I mean by saying that in India mysticism becomes a mode of reasoning.  More to the point of this conference, I want to focus on the phrase “…and therefore there is no world.”  It could be said that Raja Rao’s three major novels are obsessed with “giving up the world.”

In most religions “Giving up the world” is code for purity.  Vedantin recognize three stages in giving up the world: Faith, Knowledge, and Realization.  I initially saw Raja Rao’s major works, three remarkable novels, tracing a trajectory of increasing purity through these stages and leading towards ultimate enlightenment. 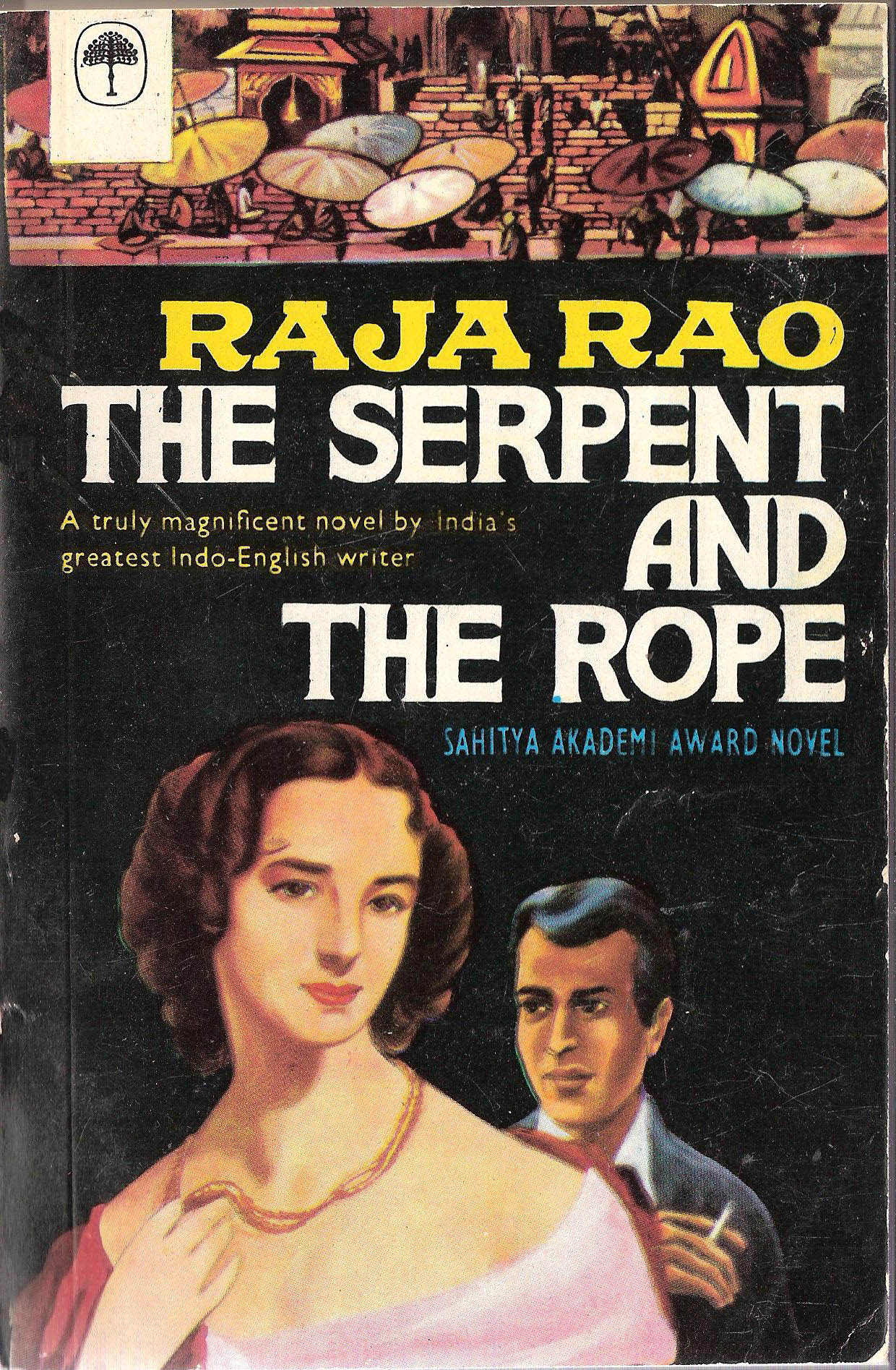 The first novel, Kanthapura (1937) could be said to center on Faith in the mythos of India.  Set during the Indian Revolution at about the time Gandhi made his salt marches, its protagonist, a young Brahmin named Moorthy, returns to his village (Kanthapura) to radicalize it.  At one point he reacts to the violence of the Revolution by fasting in the temple, thinking that if he had been full of love—ahimsa—the violence accompanying a demonstration he led against the British would not have occurred.   “That was not your fault, Moorthy!” says the character Rangamma.  He replies, “The fault of others…is the fruit of one’s own disharmony.” Moorthy seeks purity.  Attempting to give up the world, he slips “back into the foldless sheath of the soul” and, falling prostrate in the temple, chants Sankara’s “Sivoham, Sivoham.  I am Siva. I am Siva. Siva I am.”  The second novel, The Serpent and the Rope (1960), could be said to center on Knowledge.  The novel tells the story of the breakup of a marriage between Rama, a Brahmin, and Madeleine, a Westerner who teaches history.  These two characters stand for India and the West and the incompatibility of merging these two world views, especially concerning the nature of history and the relationship between the real and unreal, the root duality driving the book.  Rama says, “To integrate India into history—is like trying to marry Madeleine.  It may be sincere, but it is not history.  History, if anything, is the acceptance of human sincerity.  But Truth transcends sincerity; Truth is in sincerity and in insincerity—beyond both.  And that again is India.”  The couple have a child, whom Madeleine considers naming Krishna Ulysses, but under the strain of a collapsing marriage and the clash of world views she realizes how absurd this is.  The child is named Pierrot, and, like their first, dies within weeks.  These and other deaths are among the many burdens of the novel, which might be a short, touching, perhaps sentimental story if not for the prodigious volume of philosophy swelling the book to more than twice the length of Kanthapura.  It is as if Rama cannot escape the endless locutions of reason symbolized by his attempts to stay with Madeleine.  He is desperate to break through into pure, mystical Realization.  In the end, however, feeling increasingly uneasy about this goal, he knows he needs a guru.  In the next novel, one shows up.

—Read a remembrance of my trip to India to deliver this talk.—