Has Starbucks done it again? Yesterday, at a meeting where CEO Howard Schultz announced a 2 for 1 stock split, a new delivery service, and other initiatives, the big news was his efforts to encourage baristas to engage people in talking about…race.

The “Race Together” campaign caused immediate, often vituperative, backlash.  I have often said that Americans would rather talk about anything but race—talk constructively, I mean—so the backlash was surprising in no way whatever.

I will be expanding this post in the coming weeks, but wanted to get the news out as soon as I heard, which was on this evening’s Nightly Business Report.  Go HERE to see the broadcast for today, March 18, 2015.  The report segment, which approaches it from the perspective of business and business branding, starts at 19:01 into this video of the entire show.  The branding expert interviewed thinks that, despite all the furor, it will make good business and brand sense in the future.  And why not a business leading the way in discussing something so important that needs discussing? he asks.  Most every other body has failed, especially as it has tried to start a broad, national discussion.  That President Obama has failed to lead us into such a discussion is perhaps my biggest disappointment in his presidency.

One of the main reasons people don’t want to talk at all is that most still hold to the belief that the U.S. is colorblind, and that talking about race will only make the situation worse. When I led in the writing of a diversity plan for Naperville schools in District 203 (see that plan Here), people battered me with these beliefs constantly.

Meanwhile, as the chart below shows, Starbucks stores are densest in white communities. That may be ironic, but it may also make Starbucks the most appropriate company to take up this important cause.  The people who battered me with their faith in colorblindness weren’t generally people of color, though a growing segment of these also increasing lean towards the belief that if we don’t talk about race it will just fix itself and go quietly away. 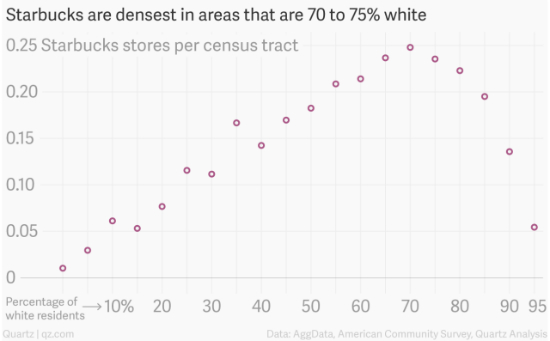