Of course Django Unchained (2012) is your average Quentin Tarantino bloodfest, yet for me the main moment of the film suggests it could have been even bloodier.  In one of the film’s quiet, reflective seconds slave master Calvin Candie (Leonardo DiCaprio) drawls to Django (Jamie Foxx) something like this: “What I don’t understand is, there’s a whole bunch of you and just a few of us.  Now, why don’t you just rise up and wipe us out?” 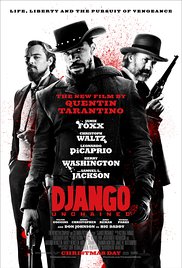 In fact, slaves did revolt often.  In the early 1930’s the number of revolts, highlighted by Nat Turner’s, naturally, was counted at around 30, but less than a decade later more rigorous scholarship, especially Herbert Aptheker’s 1943 American Negro Slave Revolts set the number at well over 300, starting with the South Carolina slave revolt of 1526 and ending just before the Civil War.  Aptheker, who counted 250, defined slave revolts as actions involving 10 or more slaves, with “freedom as the apparent aim [and] contemporary references labeling the event as an uprising, plot, insurrection, or the equivalent of these.”  Add in actions of less than 10, and consider the well-documented small sabbotages enacted daily, and you have acts of defiance numbering in the millions, obliterating all claims that the Negro slave was docile, content, or incapable of planning sustained efforts at freedom.

In this context we can see what might appear like a kind of docility in a different light.  In his great essay “Junior and John Doe,” James Alan McPherson writes:

“The very first articulation of language in their idiom, as expressed in their songs, had sufficient vitality to look beyond the trends of the moment and identify with an age that was yet to come.  The best of them looked back on their own degraded status from the perspective of a future time when their own process-of-self-making was complete.  Denied recognizable human souls by the society that enslaved them, they projected their full souls so far in the future that they became content to look back on their enslavers with laughter, and with pity.”

McPherson’s mention of music recalls Ralph Ellison’s assertion that the blues was a tool of survival, and it defines the depths of superiority Baldwin alludes to when, in his essay “Many Thousands Gone,” he writes that even our stereotype creations like Aunt Jemima and Uncle Tom,

“…had a life—their own, perhaps a better life than ours—and they would never tell us what it was….[W]e were driven most privately and painfully to conjecture what depths of contempt, what heights of indifference, what prodigies of resilience, what untamable superiority allowed them so vividly to endure, neither perishing nor rising up in a body to wipe us from the earth….”

In the same seminal essay, which I will comment on more at length in another article, Baldwin goes even deeper into the American psyche.  We want, he says, some black man to terrorize us, to take what we feel deep down inside is his rightful revenge.  Slave master Calvin Candie’s question about slaves rising up to wipe him out is actually a double fantasy, a two-for-one wish.  It both satisfies his desire to be punished for his sins, and confirms that blacks are indeed violent and monstrous.  The ultra violence of Django Unchained thus actually gives us comfort.  It wipes the slate clean. We oppressed you with monumental injustice, but now you’ve taken your revenge.  Now we’re even.  But that revenge wasn’t taken through spilling monumental amounts of blood.  Oppression was fought instead not only through appropriate militancy and everyday sabbotage, but also through exercising a superior humanity, and displaying superior talents that wove themselves so deeply into the American fabric that they virtually define what being American is in the arts, in spirituality, in the struggle for human rights, and so much more. White guilt only grew, in other words, and continues to make overcoming racism impossible. That guilt—and the white supremacy ethic it feeds—needs to be faced squarely, not entertained away through bloody revenge fantasies.

♦  Go to All Things Baldwin for more on essays like “Many Thousands Gone.”
♦  Go to Louis C.K. for another take on “now we’re even.”
♦  Go to a list of Reviews on this site, and to the Teaching Diversity main page.