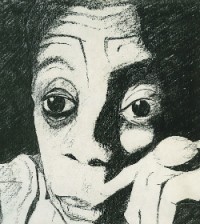 Copy of a famous sketch of Baldwin given to me by one of my classes.

This post serves as an index for everything James Baldwin on this site.  Along with Ray Charles, James Baldwin has forever, it seems, guided me along my professional life as an English professor, and both have done at least as much for me as a whole person, emotionally and intellectually.  James Baldwin has been a mainstay in my courses for over 40 years, courses such as Black Literature, Multicultural Literature, Race- Ethnicity and the American Experience, and in my writing courses as well. His exploration of the construction and consequences of race are, I believe, the most profound, personal, and searing ever articulated. And he is still vitally with us not only in his writings but in recent films like I am Not Your Negro (Oscar nominated for Best Documentary) and If Beale Street Could Talk (3 Oscar nominations, with Regina King winning for Best Supporting Actress).  There’s also a streaming channel devoted entirely to him. 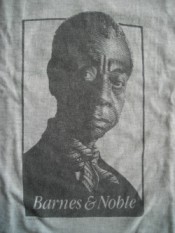 A Baldwin t-shirt given to me by one of my classes.

His writings, though, anchor his legacy, and decades after their publication they still constitute the bedrock of the way so many of us think and talk seriously about race.  And when grappling with the stubborn, malignant persistence of racism, I—as well as a host of others—find myself thinking and saying over and over: “What would Baldwin say about this?” Or “If only we could understand our humanity the way Baldwin did, and move in directions to expand it the way he challenged us to.”  His deepest challenges, however, remain unmet.  I hope the thoughts I post to this site will help us understand him more deeply and move in the directions he pointed us to.

For a while it seemed I couldn’t write anything without citing Baldwin.  In “Miscegenation and Me,” I quote his heralding of a new world: “This world is white no longer, and it will never be white again.”  And he’s always in my thinking, so that even when I’m introducing Chicago literature in my book Black Writing from Chicago, for example, I refer to him, even though he’s a son of Harlem.  So does Carolyn Rodgers in her wonderful Foreword to my book.  So do my students, months, years later. 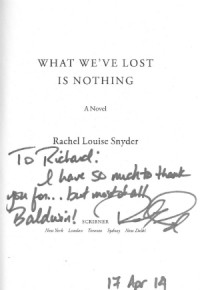 “When you talked about Baldwin’s idea of racism and ‘the void,’ our heads exploded,” said teacher Brennan Lazzaretto recently.  And then there’s Rachel Louise Synder.  Now professor at American University and an NPR contributor, she has authored two wonderful books so far, Fugitive Denim: A Moving Story of People and Pants in the Borderless World of Global Trade, and the novel What We’ve Lost is Nothing, this last book so heavy with Baldwin references she just had to inscribe my copy the way she did.  More on her important works later.

She remembers a day in class long, long ago when I spent 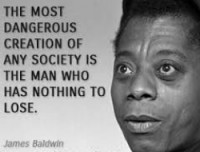 most of it, she says, turning over and over the meanings of a single Baldwin sentence.  It’s pictured at right.  I hope my thoughts will help us understand how Baldwin’s complex insights can change us into a people and a society that produce far fewer people with nothing to lose.

♦ The following essays are (or will be) on this site.  Links go live when they become available.