We celebrate the Church’s “birth” on Pentecost Sunday, the day the promised Holy Spirit arrived.  This year we celebrated on May 20th, a Sunday where at my church—one of the most diverse in America—its large Filipino group took charge of the service.  The VIDEO below shows the sermon I gave, but before you watch it, please read these…

I think about my sermons a lot, but then usually speak extemporaneously, with little or no notes; so sometimes things don’t come out quite as planned.  Here are three main things I wanted to “disclaim,” at least slightly, or correct.

1)  At 13:23 into the sermon I simply misspeak, saying that half the anger of the current white supremacist backlash doesn’t come from “hating whites.”  I meant to say “hating people of color.”  I was pointing out a great irony of this backlash.  Though of course many white

supremacist do hate people of color, perhaps as much of their anger comes from hating what they consider this country’s white elites.  I say the “majority” of their anger comes from hating these elites, though it’s probably a slim majority, like 51%.  People of color and women continue to be the live proxies for their anger, and they take it out on them rather than the white elites they detest.  I could also have added that a decisive number of whites who voted for Trump did so because they hated “white elites” and their PC.

2)  I say that James Baldwin’s words concern patriarchy as well as white supremacy, which I think they do, though he doesn’t say this directly, just heavily implies it.

3)  I say white supremacy and patriarchy hurt whites and males as much as it does people of color and women.  I do stand by this, in a way, though I do not mean to equate this “hurt” to the suffering of people of color and women at the hands of whites and males.  This suffering has been horrendous at both the personal and systemic level, and it continues, in many cases unabated, or only slightly improved to this day.  But it does hurt whites and males deeply and profoundly, as all oppressors are hurt when they oppress others.  They spend tremendous amounts of psychic and physical energy maintaining this oppression, and they close themselves off from being in touch with and developing their own humanity.  It’s a stunning loss and hurt for them, though they often don’t know this consciously.  In fact, they often continue oppressing others to shield themselves from their own monstrousness, their unease and emptiness. 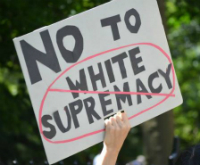 There’s more I could say to “correct, add, or disclaim,” and not just because I might have misspoken or said things that could be taken the wrong way.  I lean heavily on James Baldwin’s writings in this sermon, and say a couple of times that his writings are complex, ironic, paradoxical.  They are this way partly because the nature of the things I touched on—and I really did just touch on them—is also supremely complex, ironic, and paradoxical.  All this complexity underlies the main message of the sermon: the first thing the Holy Spirit does is to announce that in this “new religion,” which quickly becomes Christianity, there is no room for “supremacies”—not white supremacy, male supremacy, or any kind.  At the center of our faith, I say, is an empty tomb.  Jesus isn’t there.  He’s out on the peripheries, the margins, of society.  He was often criticized for hanging out there, but it’s out there that differences can be more easily accepted and celebrated, and we don’t have to be like those people—white supremacists, male supremacists, or anyone else—who try to proclaim, with supreme unease, that we must submit to their rule and be like them to be full members of what they think is their society.  To paraphrase Baldwin: When they stop thinking like this, not only will all of us be freer, they, too, will also be freer than they ever thought they could be.
_______________
On this day, Kloie Valdez read scripture, and Ann Louise Natale sang “Bayan Ko,” one of the Philippines’ great patriotic songs.  I cut the song short because when she’s singing the mic does not pick up the instrumental track she’s singing to.  Read more about “Bayan Ko” HERE.  And because I speak a lot about losing so much of my Filipino heritage—in significant part because of White Supremacy—you might be interested in Writing About the Philippines on this site.  I also site this sermon in a series on Unpacking Racism, based on the theme of the 2020 Laity Convocation of the Northern Illinois Conference of the United Methodist Church.

♦  OTHER SERMONS: “Sacred Doing,” “It’s Not What You Know But Who You Know,” “Searching for Prophets,” “Elijah: The Growth of a Prophet,” “Who Do You Stand With? A Sermon for Transfiguration Sunday,” “Three Things to Stop Saying,” “How Holy Was Jesus?” “Servants Know First,” “Everything’s OK?” “The Quiet After Easter,” “Theology and Race,” “The Lamb and the Rock.”

One Response to Pentecost Means No “Supremacies”