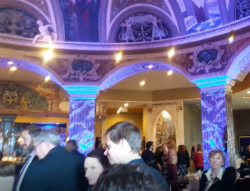 The VIDEO below captures a few highlights from a wonderful April 6th evening at the Aquaviva Winery in Maple Park, IL.  That evening some 150 friends came together to raise funds for Emmanuel House.  Thanks to them and the generosity of our corporate sponsors, it was by far the organization’s most successful fund raiser.  It started with tickets—selling out at $150 each—and continued with raffles and a live auction, an auction so exciting I forgot to film any of it on my phone!  I did, though, catch a moment of applause after a particularly rapid bidding war. Then after the auction, our auctioneer, Peter Burchard, said, “We need to do more.”  He then asked if anyone would just give $5000…and someone did.  And others just gave $2500, and others $1000, $500, and $100.  Gave it without raffles or auctions or prizes of any kind, except the prize of helping continue to break the cycles of disadvantage for our working poor neighbors.

Then a great friend of Emmanuel House, DANNY GOKEY—Grammy-nominated singer and American Idol finalist—treated us to a small, private concert, and with his full six-piece band, too, not just a tape, which I had expected because the room was so small. “After coming off a tour playing stadiums with Vince Gill and Amy Grant, Whew!” he said, “It’s nice to get close and play for Emmanuel House’s friends.”

But big changes are coming to Emmanuel House. Its core mission will always remain the same, and Bryan House, where everything started, will always remain Bryan House, and all our buildings will continue to bear the Emmanuel House name.  Rick and Desiree Guzman started all this as a living memorial to Rick’s youngest brother Bryan Emmanuel Guzman, who died in December 2006, shortly after he had just turned 21.  Still, a merger with long-time partner, the Joseph Corporation—over a year in the making—also signals big changes for all of us.

♦  PLEASE COME TO THE PARAMOUNT THEATER in Aurora, May 15th, 5:30 to 7:00 to hear the complete story and help launch Emmanuel House into a new era.  (Read about that new era HERE.)

♦  TICKETS to the event, starting at $20 general admission, and rising up through several sponsorship levels are available HERE, where you can buy and register online.

The VIDEO below shows Aquaviva and some of our friends who gathered there, and features moments from Danny Gokey’s concert, ending with his biggest record: “Tell Your Heart To Beat Again,” which just certified Gold.  I think of one of the song’s best lines: “Yesterday’s a closing door….”  It goes on to say “…you don’t need it anymore / Say goodbye to where you’ve been / Tell your heart to beat again.”  Well, it’s not as final as that!  And the real message of the song is a truth we’ve often heard: doors close and open, and some times you have to close one to open another.

Enjoy the Video below, then learn more about Emmanuel House and how, in 2016, it was named one of the “Top 100 Most Innovative” social change organizations in the world.