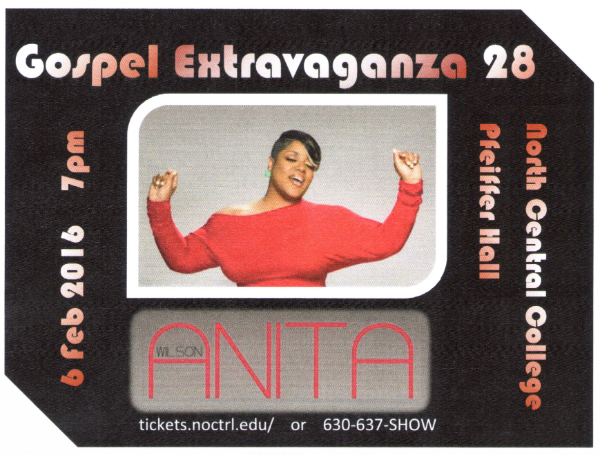 The 28th Annual Gospel Extravaganza happens this February 6th in Pfeiffer Hall on the campus of North Central College in Naperville.

This year it features rising gospel star Anita Wilson, who’ll spend the day doing workshops with three gospel choirs.  Then she and those choirs will take the stage at 7:00 p.m.

It’s a different format from other Extravaganzas, but promises to be as electric as others, too.  It’s also a little later, and serves, as it usually has, as a bridge between the college’s annual, week-long celebration of Martin Luther King, Jr.* and Black History Month.  I helped found the Gospel Extravaganza those many years ago…and more.  The process started the year before when a group of our students put on a gospel concert at Community United Methodist Church just down the street. They invited me to it and asked if I could bring the event to the college.  I had started the college’s present-day Cultural Events program and was still head of it, so I was in the position to promise them I would.  It’s been at North Central College ever since.  Follow the links below to watch a little of the 25th anniversary concert and read about it and other memories.  And please join us on February 6th.

♦  Watch video and read about the event’s 25th Anniversary.

*  Go to a video of Martin Luther King, Jr.’s “Riverside Sermon,” and follow links there to other MLK material.  The sermon was perhaps his most courageous, and miles away from “I Have a Dream.”