Margaret Danner (1915-1984) began winning poetry awards in the eighth grade.  In 1945 she won second prize in the Poetry Workshop Award at Northwestern, and went on to win such awards as a John Hay Whitney Fellowship (1951), the Harriet Tubman Award (1956), and the Native Chicago Literary Prize (1960).  In 1953 Poetry published a series of her poems, and in 1956 she became the first Black to become assistant editor of the prestigious magazine.  She was also Wayne State’s Poet in Residence, a post she acquired after moving to Detroit in 1959 to be part of the “Detroit Group” of artists and writers.  There she got a local pastor to lend her an empty parish house and founded Boone House, a cultural center for writers, artists, and musicians.

Danner claimed close personal and working relationships with the likes of Margaret Burroughs, Gwendolyn Brooks, and Langston Hughes, to whom she wrote in 1945: “My life as a poet looks very bleak to me now…Only last night I read one of mine and was told it was elusive, ethereal, etc.  Not much help for my people in that sort of verse.”  But her style—certainly elusive and ethereal—caught on as she learned to tune it to carry strong messages—albeit “quirky,” as I say below—about social justice and pride in African American and African culture.  She became one of the beloved figures of the Negro Renaissance, and even in the midst of the Black Arts Movement she was revered for her support of that younger generation of writers whose expressions were more direct and blunt than hers, and certainly not as ethereal. 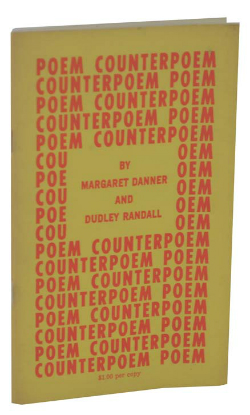 One of her biggest supporters was the great poet Dudley Randall, one of the central figures of the Detroit Group.  Together they published Poem Counterpoem (1966), wherein she and Randall wrote alternating pairs of poems on similar themes.  The wonderful “Beautiful? You Are the Most,” for Josephine Baker, comes from this collection, and I included it in my book Black Writing from Chicago, one of several works referencing Josephine Baker throughout the volume.  For Baker was a liminal, in-between figure, both lionized and desired for her obvious beauty and talent, yet also held at a distance because she was also obviously black.  Did our desire humanize her or animalize us, or was it animal of us to dehumanize her?  Or is what we think of as animal really more human, and humanizing, than we are?  The cat imagery in her Josephine Baker poem explores this wonderfully—and dangerously:

This sweet little kitten’s soft purr
nearly matches your cheek
in its grain, its contour, but this meek
little kitten, when its mittens unsheathe, cannot match
your lightning-like scratch.
Or
if this cat had the vision
would the ice in its blood
let it probe to the sore,
slit an incision,
and pour in this balm
that you pour?

She “dedicated” this poem “To Josephine Baker’s stage appearance and her all nations adoptions.”

Danner wrote from odd angles about our dehumanization of Blackness and especially of African culture in general.  Her dedication to that culture brought her a grant from the American Society of African Culture, and the Whitney Fellowship mentioned above allowed her to travel there.  African images filled many of her later poems.  “The Bells of Benin,” “The Christmas Soiree and the Missing Object of African Art,” and “To A Nigerian Student of Metallurgy” are among the best of these poems, as is “These Beasts and the Benin Bronze,” which comes from the oddly titled Impressions of African Art Forms in the Poetry of Margaret Danner (1961).   I also included this poem in Black Writing from Chicago, a poem which opens with an allusion to Chicagoan Dave Garaway’s monkey:

But irrespective of his Fauntleroy and other neat
and obviously dear apparel, have you ever
wondered whether he, if his very life

depended on it, could take a stave from a barrel
and curve a small, smooth, round stick?

It then proceeds to ask tongue-in-cheek questions about whether animals can produce art.  They can’t.  So why do we dehumanize the Africans of Benin, whose artists have produced something so obviously artful as the Benin Bronzes.  Danner’s poetry is noted for a quirkiness and conversational style that suddenly gives way—with beautiful complexity, and often delicately—to insights into the nature of art and our human, humanizing, need for it.

♦ Go to a list of Black Writers written about on this site.