“Nativity”: Piano and Jazz at Christmas

Decades ago, when I was around 17-18-19, I had, briefly, a jazz trio.  And our church youth group wrote and performed a Christmas play.  And the two came together when I wrote a theme for that play, called it “Nativity,” and the tune became one of the main ones my trio always played.  Below you can hear a recording of “Nativity”—now around 45 years old!—so long ago I don’t recall if we ever gave our trio an official name.  We were the rhythm section of a bigger band I had called The Pit Band because we played in “the pit”—as in “orchestra pit”—backing up shows.

The trio was me, Dave Dwyer on bass, Tom Pence on drums.  We’re practicing at the Free Methodist Church in Hayward, California, and a friend, Gary Scott, just happened to be there with a little tape recorder and two tiny mics.  There are a few miscues, of course, the sound shatters a lot, and the drums blast too loud, but I think the recording captures a good deal of the fun we’re having fooling around with a variation of an Allelujah I had written for the play.  San Francisco’s Grace Cathedral had recently installed a replica of Lorenzo Ghiberti’s Doors of Paradise, which inspired this music, and the city’s own Vince Guaraldi—of Peanuts and “Cast Your Fate to the Wind” fame—had composed a similar piece.  My piano influences are mainly people like Ray Charles and Ahmad Jamal, but here, while Jamal peeps through, it’s almost 100% Brubeck—at least a 17-year-old’s poor, halting tribute to one of his musical idols.  When Brubeck died a couple of years ago I wrote “Un-Blue Jazz: Remembering Dave Brubeck,” which you can read Here. 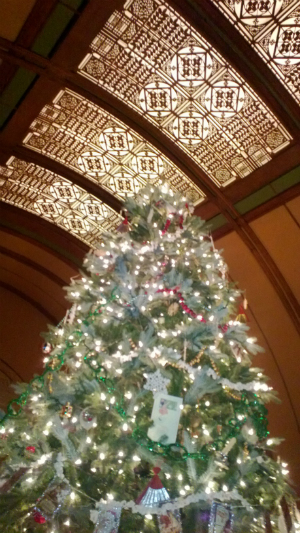 And then this Christmas, as it has been for several Christmases now, more piano jazz at Christmas time on an unlikely piano in an unlikely place: Frank Lloyd Wright’s original grand piano in the children’s playroom of his Home & Studio in Oak Park, Illinois.  It’s one of the world’s most beautiful rooms.  You experience the compression and release of space Frank Lloyd Wright was famous for as you walk through a low, narrow, cramped hall way, then enter the room to be liberated by a high, stunning, barrel-vaulted ceiling, wood-banded, topped by a gorgeous light screen, while the lower walls move outward through bands of art-glass windows.  At Christmas there’s also a tree.  It takes up a lot more space than the piano because, to save floor space, Wright cut a hole in the wall and pushed virtually the entire piano through it, suspending most of it over a back stair case.  It’s almost just the keyboard you see, and you laugh every time you do.

I’m one of the few people who ever get to play the piano at all, a situation opened up to me because my wife, Linda, is the Volunteer Manager of the Frank Lloyd Wright Trust.  It’s become a little tradition of sorts for me to play that piano at Christmas, the most special time coming at the end of Linda’s annual Christmas party when everything’s winding down.  A few people are helping put tables and things back where they belong, and some just linger, savoring the joy of the evening a little longer, and, as part of that, drifting up to the children’s playroom, where I sit down and play a few more songs of the season.

I don’t know if anyone savors my late-night noodlings more than Jack Lesniak, a premier Wright expert and one of the architects who saved the Home & Studio during the great restoration project in the 1970’s.  He’s revered at the Trust, where you hear, “We wouldn’t be here without you, Jack,” a lot.  This year he said to me,  “Can you play ‘Drummer Boy’ the way Ahmad Jamal might have done it?”  I could and did.  “You know, I always loved Ramsey Lewis,” he said.  “Ever heard his Christmas album?” I asked, then did some Lewis impromptus as best I could.  Now when everyone is mellowing out in the party’s afterglow and it’s later and smaller and darker, my renditions of Christmas tunes get more jazz-tinged.  I sometimes play “Nativity,”  mostly the slow rubato parts, but I always feel my old trio chomping at the bit, waiting for me to finish the flowing statement of the main melody so we can swing into the improvisation.  After almost every performance, Tom Pence would say, “Awww, we were just getting into it.  Why do you always have to end it?”  That’s his soft, spontaneous “Yeah” of joy you can just hear amid the rumbling thunder of his drumming.  Spontaneous joy.  Not a bad way to celebrate this time of year.

One Response to “Nativity”: Piano and Jazz at Christmas