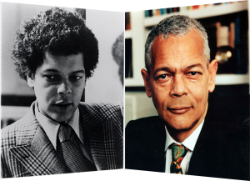 Julian Bond (b. 1940) passed away this past August 15, 2015.  He led an extraordinary life of  service, especially in the cause of Civil Rights: one of the founders of SNCC (The Student Non-Violent Coordinating Committee), first president of the Southern Poverty Law Center, president of the NAACP for a dozen years, four terms as a Georgia State Legislator during historic times, narrator of Eyes on the Prize, distinguished professor of history at the University of Virginia….  At the 1968 Democratic National Convention he became the first African American nominated to a Presidential ticket, though he quickly declined, reminding everyone the Constitution set a minimum age of 35.  He was only 28.

He also loved Ray Charles.  That was the special personal bond I had with him.  On those few occasions we met, we always wound up talking about Ray. 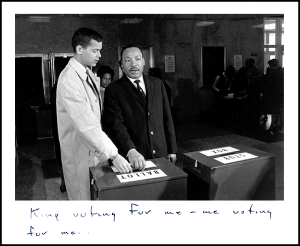 It was some time in the mid-80’s.  As the head of the Cultural Events Committee at my college, I had helped bring many black speakers to campus, and one of them must not have gone over well.  Too unpolished, perhaps too radical?  “Next time,” the president of the Black Students Association said to me, “could we invite someone more, ah…sophisticated?”

The most sophisticated, urbane man I knew was Julian Bond, so I brought him to campus the following year.  Upon arriving, he immediately disarmed our president, saying, “Hello, Sir, I have great feeling for college presidents, as my father was one himself.”  Then he proceeded to give a stem-winder speech, calling Nixon the “man who took us from the moon to My Lai,” castigating America for its lack of honesty and courage, its moral failures—one of which, of course, was its continual dodging of race issues.  The next day, I got a note from a college donor saying we had seen the last of his contributions, “owing to the Commie speakers now being invited to speak.”  Disheartened, I showed the note to a colleague in Religious Studies.  “We don’t need money from Nazis anyway,” he retorted, lifting my spirits a few degrees.

As Julian Bond was leaving the previous afternoon, all we did was talk about Ray Charles, and as he ducked into his limo and got seated, he rolled down the window and said, as the limo pulled slowly away, “We’ll have to be careful around some people because, you know, Ray has refused to honor the cultural boycott of South Africa.”

A few years earlier, I had bumped into him and asked him to read a poem he’d written about Ray Charles, a poem Charles put on the back of his 1971 album The Volcanic Action of My Soul.  I recorded his reading and put it on one of the episodes of my radio series Voices and Freedoms, a series based on my book of the same name.  It was program #12, on the move away from Cool Jazz towards a harder, funkier jazz—Hard Bop or Soul Jazz, some called it.  And I took a moment to “get carried away,” I said, talking about my favorite musician, Ray Charles having been one of the most visible stars of that movement.  You can hear Julian Bond reading his poem HERE, near the beginning of  Part 4 in a series of Ray Charles “lectures” I’ve posted to this site.  Here’s the poem below.  It’s part of the back of  the Volcanic Action album. Julian signed it.  “Remember this?” I said, handing him the signed album some years later.  “That’s been awhile,” he said wistfully.  Very few accomplished more in their brief whiles on earth. 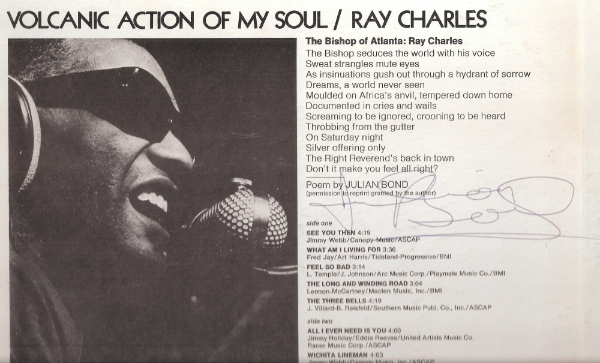 ♦ Go to the lead Ray Charles post, listing “All Things Ray” on this site.

♦  Go to the lead episode of “Me and Brother Ray,” a 5-part video “lecture” on Ray Charles.

♦  Go to Voices and Freedoms: A History of Jazz.  The book was also made into a radio series of the same name. Listen to a radio show excerpt from show #14.  Julian Bond read his Ray Charles poem originally in show #12.

This entry was posted in Music & Meaning, Social Change and tagged Julian Bond, Me and Brother Ray, Ray Charles, Voices and Freedoms: A History of Jazz. Bookmark the permalink.