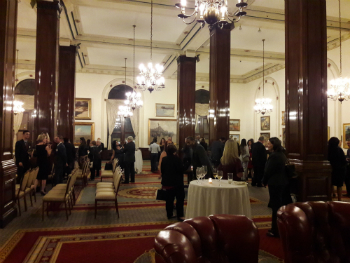 The VIDEO below shows Rick Guzman’s speech upon receiving the 2019 Young Alumnus of the Year Award from the Northern Illinois University College of Law, presented at the Union League Club in Chicago.  The citation reads:

“Rick is the Executive Director of The Neighbor Project, a grass-roots housing and community development organization formed through the merger of Joseph Corporation and Emmanuel House, two long-time housing and home-ownership non-profits based in Aurora, Illinois.  Prior to that Rick served as the City of Aurora’s Manager of the Community Development Division and as the Mayor’s Deputy Chief of Staff working on housing, economic development and neighborhood planning.  Rick and his wife, Desiree, co-founded ‘Emmanuel House’ in Aurora in 2002 to help lower-income families break the cycle of working-class poverty through a unique and dignified pathway to home ownership.  In 2016, Emmanuel House’s ‘Networked Savings Program’ was recognized as one of the ‘100 most innovative nonprofit or social enterprise programs in the world,’ as a Classy Award finalist [presented by the social change platform Classy, in association with Stanford University, and the United Nations].  The ‘Networked Savings Program’—now a core program of The Neighbor Project—continues to partner closely with churches, local government, civic organizations and other non-profits in the greater Aurora area.  Previously, Rick worked at the State of Illinois as Policy Advisor to the Governor on Criminal Justice issues.  In 2004, he was appointed by the Governor to direct Illinois’ prisoner reentry reform efforts.  In April 2019, Rick was elected to a six-year term to serve as a Trustee of Waubonsee Community College.  He continues to serve on numerous Boards and Commissions working on public policy issues in state and local government and the non-profit world.”

In his acceptance speech he continued to highlight what has become one of his major themes:  taking the focus off of what you or your organization can accomplish, and instead focusing on what your neighbors can accomplish.  He also mentions me taking him at a very young age to serve the homeless, an experience reporter Nancy Kirby wrote about in a wonderful article, “Seeds of Change.”  In the article Rick says, “When Hesed House [Aurora’s homeless shelter] was first founded, my Dad took us to volunteer there, so it’s always been kind of cool to recognize my interest and awareness of homelessness from a very young age”—an awareness perhaps foundational to his leading organizations devoted to creating home owners.

He also mentions the death of his youngest brother, Bryan Emmanuel Guzman, which has been the catalyst for many things the NIU School of Law honored him for this September 24, 2019.  After watching the VIDEO below, follow the links embedded above to find out more about The Neighbor Project, the many things leading to it, and how you can become involved in lifting up your neighbor and changing worlds as you do.

♦  Visit the websites of Emmanuel House and The Neighbor Project.  At the latter you can also watch a VIDEO introducing the new organization, or go directly to it Here.  I was privileged to narrate it.

♦  Read Rick’s important Law Review article on educational inequality.  He titled it, provocatively, “An Argument for a Return to Plessy vs. Ferguson”  It led, in part, to his receiving the Thurgood Marshall Award upon his graduation from NIU Law.