N.V.M. Gonzales (1915-1999) was one of the Philippines’ greatest writers.  He was named a National Artist for his iconic short stories, novels, and essays—including A Season of Grace, one of the most beautiful novels ever to come from the “Third World.”

I sent the galleys of the essay to him before publication.  Unknown to me, they had arrived on his 40th anniversary, and he pronounced them one of the best anniversary presents he had ever gotten, saying, “It’s about time someone got around to reading the signs!”

He had the article made up into a little booklet and sent it ahead to places he was going to speak at.  “This is who I am,” he’d say.  Then he included it as the last section of his marvelous and important book of essays called Work on the Mountain.  In 1999 Yale University’s Harold Bloom, one of the country’s most influential critics, picked my “As in myth…” piece as one of the 15 best modern essays about Asian-American 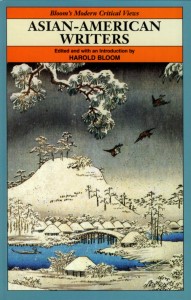 writers and included it in his book Bloom’s Modern Critical Views: Asian-American Writers.  There will be a limited number of copies of this book for sale on this site in the future.  Go Here for more information.