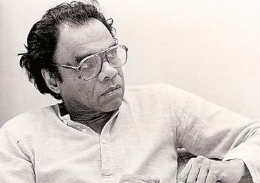 Born in Mysore, India, Attippat Krishnaswami Ramanujan (1929-1994) is considered by many to be India’s finest modern poet writing in English, though he went far beyond English, his other writings as poet, scholar, playwright, philologist, folklorist, and translator ranging over five languages: English, Kannada, Teluga, Tamil, and Sanskrit. His books of original poetry in English are The Striders (1966), Selected Poems (1976, Second Sight (1986), and The Black Hen: Complete Poems (1995). His Collected Poems (1995) won India’s highest literary award, the Sahitya Akademi Award in 1999. In 1976 the Indian government honored him with the title Padma Shri, its fourth highest civilian award, and in 1983 he received a MacArthur Fellowship, the so-called “Genius Grant.”  Though he taught at Harvard, Wisconsin, Berkeley, Carleton, and Michigan, his home base was the University of Chicago, where he helped develop the South Asian Studies Program and became the William E. Colvin Professor in the departments of South Asian Languages and Civilizations, Linguistics, and the Committee for Social Thought.

Elliptical and intellectual, his poetry resists easy interpretation, but is carefully crafted and full of startling imagery.  David Starkey and I included five of his poems in our 1999 book Smokestacks and Skyscrapers: An Anthology of Chicago Writing, and David commented that like a strider (the water bug in the poem “The Striders”) his poems “often seem to walk on water while drowning in their ‘tiny strip / of sky.’”

A sardonic observer of his own foibles as well as those of his homeland and adopted country, he found fascinating ways of incorporating elements of East and West in his work and, naturally—given the global dimensions of his life—often explored hybridity and themes of travel, migration, and even transmigration.  The poem “In March” begins: “In March I traveled / not by train or bus or plane / but through the bloodstream / warm as the ocean currents / that took Aztecs to Mexico.”  Do such global flows, however, ever allow you to feel truly at home, or even to truly reach that other country you’re aiming for.

His wonderful “Sonnet” begins: “Time moves in and out of me / a stream of sound, a breeze,” but is also like “an electric current / that seeks the ground….” And this movement also comes with “misplaced leases and passports,” while “excuses and blame swirl through the night / and take me far away from home.” The excerpt from “Chicago Zen” at left brings you face to face with “what you always knew: / the country cannot be reached.”  Not by jet, and not even, as the poem says near its end, “with a clean valid passport, / no, not even by transmigrating / without any passport at all….”  And even if you kind of get “there,” fear and paranoia might rule the day, so that in his poem “Take Care” he advises people to “Smudge your windows / Draw the blinds” because “All tall buildings / use telescopes.”  “In Chicago,” the poem ends, “do not walk slow, / Find no time / to stand and stare. / Down there, blacks look black. / And whites, they look blacker.”  As much as travel and migration give us freedom to move, they also restrict our feelings of being at home, feeling rooted and secure. And in a poem like “Death and the Good Citizen” the speaker wishes to be truly “biodegradable,” thus participating in the flow of life into death into life, but cultural customs themselves interdict this flow making it a “struggle to be naturalized,” especially “Abroad”—in a strange land, that is—“where they’ll lay me out in a funeral / parlor, embalm me in pesticide, / bury me in a steel trap, lock / me so out of nature / til I’m oxidized by left- / over air….”  We long for free travel, free migration, free flow in the proverbial circle of life, but find restrictions, walls, blockades everywhere: in the material world, in culture, politics, and in our own minds.

♦  Go to a list of Chicago Writers on this site, and to the Teaching Diversity main page.

This entry was posted in Chicago Writing, World Writers and tagged A.K. Ramanujan, Smokestacks and Skyscrapers: An Anthology of Chicago Writing. Bookmark the permalink.