Ten Frank Lloyd Wright buildings have been nominated for UNESCO World Heritage status, beginning with Unity Temple (1905) and ending with the Marin Civic Center (1957). The Guggenheim opened in 1959, just months after Wright’s death, but we often date this building, also nominated, in the year he began planning it: 1943.  It was 16 years before it opened–16 years being an example of how far ahead of his time Frank Lloyd Wright usually was—at minimum.  Most haven’t caught up with him yet. 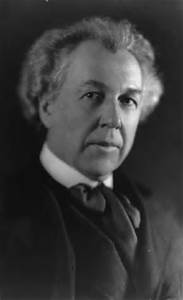 Recently I was asked what the musical atmosphere was like from 1905 to 1957 and put together a playlist for my wife Linda, a manager at the Frank Lloyd Wright Trust, who used it at a Trust event.  You you can it see HERE.  Doing this, I was struck again by three things. The first I noticed strongly a couple of years ago at a Unity Temple concert given by Reginald Robinson, a MacArthur “genius grant” recipient for his work in reviving and re-imagining ragtime music.  The first item on my playlist is Tom Turpin’s “St. Louis Rag,” a 1905 hit.  Listen to that song or Scott Joplin tunes like “Maple Leaf Rag” or “The Entertainer,” and it’s hard to square that experience with the experience of Unity Temple, Heurtly House, Robie House, etc. The music sounds so old, those buildings feel not only so new, but in fact still define a future most may never catch up with.

Second, while most of the pop music seems dated in relationship to Wright buildings, the “advanced,” “concert” music of the time doesn’t.  My playlist included pieces from Stravinski, Bartok, Copland, Bernstein, Schuman—the energy and line of Stravinski’s “Petrushka,” for example, matching the energy and line of many Wright buildings.  Here’s what’s striking, though.  There’s very little evidence that Wright listened much to these people, though we think he just must have, especially to Copland and Bernstein.  Copland in particular defined an American musical style (though much indebted to the Russians) just as Wright argued for and defined an American architechtural style.  Wright has been linked with Whitman, and Schuman’s “A Free Song” set some iconic Whitman words to music, his efforts winning him the first Pulitzer Prize for music.  Was Wright aware of Schuman?  Music was incredibly important to him, yet all I ever hear about is his love for Bach, for Beethoven, for things “classical” and European.  In Ken Burn’s Frank Lloyd Wright the soundtrack is all Beethoven all the time, it seems.

Third, and most striking of all: forget Copland, Bernstein, Schuman—there’s even less evidence that Frank Lloyd Wright listened to pop music.  But he must have.  I think.  His father’s musical meanderings might have gotten him close to early-century pop, though, of course, theirs was a relationship more of absence than presence.  On the other hand, it is difficult to imagine Frank Lloyd Wright listening to, say, Chuck Berry, whose anthemic “Rock ‘n’ Roll Music” circulated in the same atmosphere that saw the opening of the Marin Civic Center. Yet I feel a strong, if indirect, bond between Wright as an individual person, not necessarily an iconic architect, to some of the pop music circulating during these 52 years.  My playlist contains Sinatra’s last single for Capitol Records, “Why Try to Change Me Now,” a phrase we can easily imagine spilling—continuously—from Wright’s lips. And I feel a connection, though probably indirect, between many pop songs and Wright’s love life. 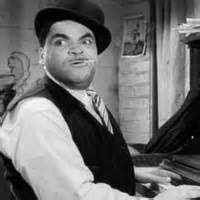 The drama and scandal accompanying that life is too familiar to have to recount.  In my playlist I indulged my love for one of the 1930’s great musical and comedy geniuses, Fats Waller.  Think about Frank Lloyd Wright possibly listening to “I’m Gonna Sit Right Down and Write Myself a Letter” (1935), “It’s A Sin To Tell A Lie” (1936), and “Two Sleepy People” (1938), in the off hours when he was finishing, respectively, Falling Water, Jacobs House, and Taliesen West.  In “It’s A Sin…”, Fats bellows and parodies the lyric this way: “Millions of hearts have been broken (Yes, Yes) / Just because these words were spoken / (You know what the words is? Here it is:) I love ya, I love ya, I love ya (Ha Ha Ha) / But if you break my heart, I’ll break yours, and then I’ll die / So be sure it’s true when you say, I love you (Ha Ha) / It’s a sin to tell a lie (now go out there and tell your lie—what is it?).  The last comic parenthesis brings in clarinetist Gene Cedric for the first improvisation chorus.   Fats both embraced and parodied 1930’s concepts of love.  He made sly fun of our checkered love histories, our hero Frank having one of the most checkered of all.  In “…Write Myself a Letter” and “Two Sleepy People” it’s more embrace than parody, and somehow I imagine Wright giving in to the sentimental cleverness of the first song and embracing the scene from the second where two sleepy people talk and smoke and linger till morning because they’re  “too much in love to say goodnight.”

It couldn’t have been just talk about art and architecture that made him a romantic figure, could it? I can almost hear him saying something like the lyric from Bing Crosby’s 1943 hit: “Moonlight becomes you / It goes with your hair / You certainly know the right things to wear.”  Something like that—maybe even more lush, even lushy.  Listening to Bing, and even Fats, you realize that romance was more, well, “romantic” back then.  I don’t believe it too far-fetched to think the pop atmosphere influenced Wright’s personal life and public poses, some songs perhaps serving as siren songs calling him to indulge.  They probably effected his professional life too.  Imagine moonlight pouring down on the Hollyhock House, for example.  Imagine staring out its front windows at the Hollywood sign on a nearby hill.

♦  Go to the Voices and Freedoms page.  Dr. Guzman’s first book was also made into a 16-part radio series of the same name.  Show #7 was on Fats Waller.