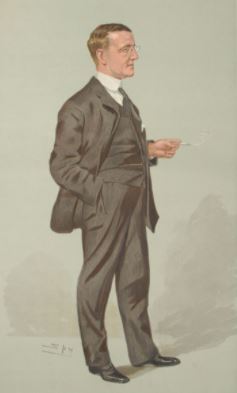 Finley Peter Dunne was born on the West Side of Chicago in 1867 and graduated at the bottom of his high school class. That’s a funny and appropriate fact given the shape of his career.  At 17 he began working as a reporter for the Chicago Herald, and between 1893 and 1905 wrote over 700 columns featuring one Mr. Dooley.  As Richard Sloane writes in the University of Pennsylvania Law Review, “Dunne is a blue-collar Oscar Wilde—bright but blunt. Where Wilde’s epigrams are delivered with a rapier, Dunne is most at home when he wields a sledgehammer. He expresses his views of the world, particularly the legal world, through a breezy saloon-styled genius, Mr. Dooley, who is his fictional counterpart. Martin Dooley, an ignorant, immigrant Irish bartender, ‘with all his horse sense, his native wisdom, his cracker-box philosophy, his attacks on sham and hypocrisy,’ makes his first appearance in a piece written by Dunne for the Chicago Evening Post in 1893. Mr. Dooley’s language is an Irish patois of Dunne’s invention spiced with barroom expletives and racist [and ethnic] pejoratives.”

Though some columns seem dated today, and Mr. Dooley’s brogue can sometimes be impenetrable, in the early 20th century Dunne was considered one of the most famous columnists in the country.  Then again, many of his columns and Mr. Dooley’s pronouncements seem super relevant today, even taking on the patina of timelessness.  A recent (May 6, 2021) BBC News headline, for example, says, “U.S. birthrate falls 4% to its lowest point ever.”  In our book Smokestacks and Skyscrapers: An Anthology of Chicago Writing, David Starkey and I included a column titled “The American Family.” It begins, “’Is th’ race dyin out?’ asked Mr. Dooley…’Th’ ministhers an me frind Dock Eliot iv Harvard say it is.’”  But he’d know different, continues Mr. Dooley, if he was a real doc and just went flying down Halstead St. flogging a white horse to get somewhere on time. So the column begins with another theme current in 2022: out of touch elites, represented here by a Harvard president Charles William Eliot.  It ends with real life facts elites wouldn’t know because they’re just interested in how many children Harvard grads are having—which, in this case, isn’t many.  Mr. Dooley has been speaking with one of the bar’s regulars, Mr. Hennessy, who, on the other hand, has 14 children.  The column ends: “’If th’ race iv Hinnissys dies out,’ said Mr. Dooley, ‘twill be fr’m overcrowdin.’’” 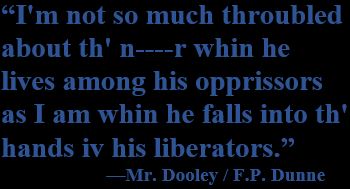 Or take this Mr. Dooley-ism: “I’m not so much throubled about th’ n- – – -r* whin he lives among his opprissors as I am whin he falls into th’ hands iv his liberators.” Given Mr. Dooley’s racial and ethnic pejoratives, virtually all commonly and casually accepted back then by white society, this could mean that the “liberators” turned people of color into uppity persons who no longer knew their place, who actually thought they deserved equality.  But I’ve written a lot about The “Wokeness” Problem recently, and I hear another possible undertone to the statement.  It could also suggest that those who are woke, liberal, progressive, and supposed allies harbor, beneath their advocacy, a continuing sense of white supremacy and a view of Blacks and other people of color as hapless victims. I wouldn’t put it past Mr. Dooley/Finley Peter Dunne to have addressed this issue, which you can read more about at the “wokeness” link above.

The Mr. Dooley quotables are many, and they might be clearer when read in context. I’m still searching for the piece where the liberators vs. “opprissors” quote comes from, so I’d appreciate any help out there.  There were at least ten Mr. Dooley collections, beginning with Mr. Dooley in Peace and War (1898) and ending with the posthumously published Mr. Dooley at His Best (1936).  “The American Family” we spoke of above comes from Dissertations by Mr. Dooley (1906).  A few more of his famous sayings: “Alcohol is necessary for a man so that he can have a good opinion of himself, undisturbed by the facts.” “The job of a newspaper is to comfort the afflicted and afflict the comfortable.” “Trust everyone, but always cut the cards.” “A man never becomes an orator if he has anything to say.”  “One of the strangest things about life is that the poor, who need the money the most, are the ones that never have it.” “No matter whether the Constitution follows the flag or not, the Supreme Court follows the election returns.” Etc. Etc.

Dunne’s popularity waned after World War I.  He moved to New York in 1900 when he was  becoming nationally renowed, but died there, nearly forgotten, in 1936.

This entry was posted in Chicago Writing and tagged Finley Peter Dunne, Mr. Dooley, Smokestacks and Skyscrapers: An Anthology of Chicago Writing, The Wokeness Problem. Bookmark the permalink.