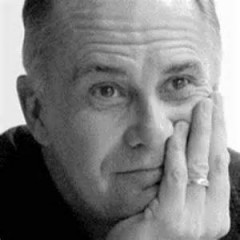 Marc Kelly Smith was born and raised on the Southeast Side of Chicago, near the South Chicago Steel Works, which employed both his grandfather and, briefly, his father.  Smith attended (but didn’t finish) college, married, had three children, and worked construction to support his family.  He wrote poetry on the side.

His life changed in 1987 when he began the “Poetry Slam,” which he is generally credited with both inventing and popularizing.  Working out of the Green Mill Tavern on Chicago’s North Side, Smith saw the slam as a way to recapture poetry from the elite and return it to the people—where he believes it belongs, though, perhaps predictably, poetry slams have received a mixed reaction, especially from those “elites,”  a controversy Smith directly engages in “The Good Samaritan,” one of three Marc Smith poems David Starkey and I included in our Smokestacks and Skyscrapers: An Anthology of Chicago Writing.

“Taking an angry poet home / On a rainy night after the Slam / Is not a driving experience / Recommended by the Chicago Motor Club,” the poem begins.  “No, it’s more like / Paddling upstream in a wind storm / On a planet other than your own / In a dream that loops endlessly around / The relentlessly boring question of: / ‘What is, or what is not, real poetry?'”  The poem ends with the angry poet yelling, in all caps: “‘HOW CAN YOU CONDONE THAT BULLSHIT! / THAT’S NOT POETRY'”

Smith still considers the What’s-Real-Poetry question relentless boring, but, paradoxically, he cares about good poetry a lot—whatever that is—and the combination of his blunt, rough-and-tumble, often ridicule-laden persona and his sensitivity to good poetry—again, whatever that is—has fueled the Uptown Poetry Slam, making it a fixture of Chicago’s cultural life for three decades and spreading slams across the world.  Read more about the Uptown Poetry Slam and the slam poetry controversy HERE. 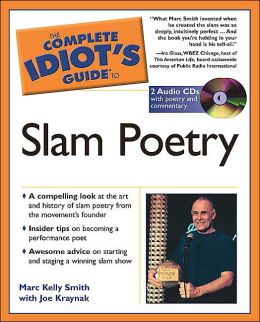 And you can also read more about it in Smith’s The Complete Idiot’s Guide to Slam Poetry, co-authored with Joe Kraynak, which boasts this comment from This American Life’s Ira Glass on the cover: “What Marc Smith invented when he created the slam was so deeply, intuitively perfect…And the book you’re holding in your hand is his tell-all.”  One passage describes Smith’s approach to the Uptown Poetry Slam: “You’re the maestro and the conductor, and as such, your job is to orchestrate a show that plays like a concerto consisting of several movements…lifting and dropping the audience’s emotions, raising its consciousness, and eliciting its most lurid dreams.”

Besides the iconic Slam at the Green Mill, Smith has created a number of other poetry organizations and ensembles like Pong Unit One, Neutral Turf’s Chicago Poetry Festival, and the Poetic Theater Project.  Smith is himself a dynamic performer of his own work which he has read across the country, including at the Smithsonian Institute and the Kennedy Center, and he has been featured on CNN, 60 Minutes, and NPR.  In 1996 his poems were collected in Crowdpleaser.  In Smokestacks and Skyscrapers we also included his “Sandburg to Smith, Smith to Sandburg,” his salute to his major influence Carl Sandburg, as well as his valedictory “My Father’s Coat.”  “I’m wearing my father’s coat. / He has died.  I didn’t like him, / But I wear the coat,” it begins.  “There was more of everything he should have done,” it continues, and it ends: “I wear my father’s coat. / And it seems to me / That this is the way the most of us / Make each other’s acquaintance— / In coats we have taken / To be our own.”

♦  Go to a list of Chicago Writers on this site.