How the Other Third Lives 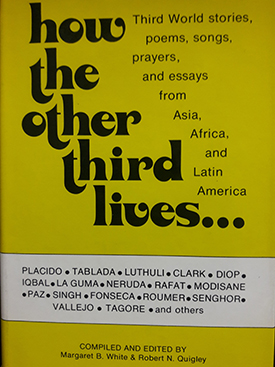 There’s much more on the so-called “Third World” today, though it’s still mostly out of sight, out of mind for most Americans, except for its association with terrorism and, currently, as a place where all those “sh*t hole countries” are.  In 1979, when I wrote the following “Briefer Comment”  for The Virginia Quarterly Review, there was far, far less available, and the “Third World” was further out of sight.  I’m perhaps harder on the book than I should be, but even then I sensed that How the Other Third Lives—an anthology of “Third World” prayers, songs, and literature edited by Margaret B. White and Robert N. Quigley—was one of the first attempts to bring that area of the world into the popular imagination and connect it to our “First World” history.

Here’s what I wrote on June 19, 1979:  “The poetry and prayers section of this anthology of Third World Literature is good and surprisingly ‘warm’ and ‘pleasant’ at times.  The stories, essays, journal extracts, and novella are of very uneven quality, and though one can see some point to it, one sometimes wishes America’s ‘Declaration of Independence’ and Martin Luther King’s ‘I have a dream’ speech hadn’t been included.  The editors stretch the term “Third World” quite a bit, and by their own admission have presented a ‘personal offering’ that is neither scholarly nor very representative.  Though it includes some fine, standard material and provides short biographies of some very fine writers, the anthology gives an insufficient view of the best literature the Third World offers.  If one keeps this in mind, however, this book, with all its shortcomings, will benefit us by providing a fair, general feeling for a literature about which most of us know very little.” 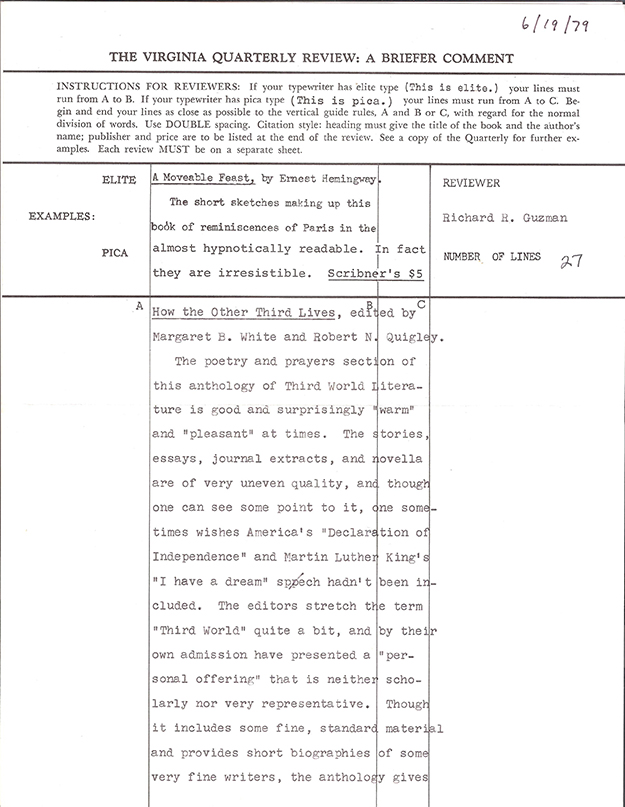 As a regular part of my teaching load, I’ve now taught “Third World” literature, culture, politics and economics for over 40 years.  For more about the “Third World” on this site—including why I persist in using that term—go to “The Third World,” and to “The ‘Third World:’ A Course Overview,” which contains, at the end, a VIDEO overview of an interdisciplinary graduate course I have taught for many years.

My first big articles, those that established me as a writer and scholar, were on the “Third World” writers N.V.M. Gonzalez and Raja Rao.  These two essays form the foundation of a developing page on WORLD WRITERS on this site, a page devoted mostly to “Third World” writers, but also to the enormous area of World Writing itself, an area—whether “Third World,” French, Australian, Canadian, etc.—we also need to know more about.

Despite current politics, globalization isn’t going away.  On this World Writers page you’ll find this link: POST-COLONIAL WRITING IN ENGLISH: A WRITER’S LIST.  This post reports on The Arnold Anthology of Post-Colonial Literatures in English and provides a pdf of the Table of Contents, so you can at least catch a glimpse of the richness of just the names themselves.  It’s a much, much bigger book than How the Other Third Lives, and much more inclusive and scholarly, too, even though it confines itself to “just” writing in English.  One reason globalization isn’t going away is the English language itself.

This entry was posted in World Writers, Writing and tagged How the Other Third Lives, The "Third World, Virginia Quarterly Review. Bookmark the permalink.