Who Do You Stand With? A Sermon for Transfiguration Sunday – Part 2

This is PART 2 of a sermon I preached on February 23, 2020, ahead of a vote at my church to become a Reconciling Church and join the Reconciling Ministries Network, a network of churches advocating for full inclusion of LGBTQ+ persons.  This issue has been a contentious one in the United Methodist Church for decades, coming to a boil when the 2019 General Conference of the church voted to uphold the “Traditional Plan,” maintaining and tightening restrictions on LGBTQ+ persons and clergy who supported them in such things as marriage.  Due to technical issues, a video of this sermon may not be available.  It will be posted below if it does become available.  What follows is a rough recollection of what I said.  Read PART 1. 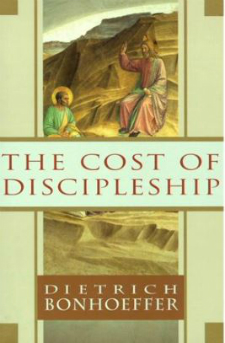 I love the church, so it really pains me to say that, on the whole, the church has not been good standing with or speaking up for people who are fighting for freedom, equality, and inclusion, people asking—crying out—for help and protection.  You against racism?  And the church kind of whispers, “Oh yeah, we’re against that.”  I’m glad that this year’s Laity Convocation had as its theme “Unpacking Racism” (see link below), and I’m really glad I could participate.  I know the UMC has a commission on race, too, and I’m happy about that. But it’s 2020, nearly seven decades after Brown vs. Board of Education and we’re still talking about unpacking racism. The church could speak up louder with more vitality and conviction, instead of—on the whole—mumbling, “Yeah, we’re against racism.”  We kind of stand with people, but it’s a weak, droop-shouldered stance.  Our voice has been tepid, luke warm, and worse: often the church, instead of standing with these people, has acted to keep them un-free, un-included, and in danger.  Of course, of course, there are exceptions.  Martin Luther King, Jr. came out of the church, as did many, many who fought and continue to fight for Civil Rights.  But on the whole the church’s response has not only been tepid; it remains to this day one of the bulwarks of racism, and Sunday remains perhaps the most segregated day in America.

It’s been similar, sad to say, in our stance against sexism. Again, the church has provided some place for women to develop their gifts and to lead, but on the whole, when it speaks, that voice, too, has mumbled around for decades, and very often those in the church who would keep women subservient have spoken up much louder and with greater conviction.

The ultimate example of the church’s luke warm, whispering voice, its slack-shouldered stance, was in Nazi Germany.  Again, there was opposition to Nazi rule, and the so-called Confessing Church spoke loudly against the regime.  One of its leaders was Dietrich Boenhoeffer, who wrote the great book The Cost of Discipleship, which begins with that startling sentence, “The great enemy of the church today is cheap grace.”  We want all the advantages of grace but don’t want to do anything for it.  We don’t want to stand with people, speak up for them.  Bonhoeffer was executed.  Another leader of the Confessing Church was Martin Niemoeller, who uttered the famous words: “When they came for the Communists, I didn’t say anything because I’m not a Communist.  When they came for the Jews, I didn’t say anything because I’m a Christian. When they came for the Trade Unionists, I didn’t say anything because I don’t belong to a Trade Union.  And then they came for me, and it was too late.  There was no one to speak up for me.”  Niemoeller spent seven years in a concentration camp.  But on the whole, the traditional German church whispered its objections.  Its virtual silence enabled the horrors of the war and the concentration camps, and much of the church openly stood with that evil regime. 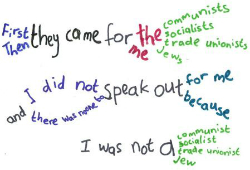 We could speak louder.  That’s what the vote to join the Reconciling Ministries Network really amounts to today.  It’s amplifying our voice for, and standing stronger with LGBTQ persons. We won’t even be the first UMC church in our district to do so.  We also know that the vast majority of American UMC congregations—something like 85%—do not support the Tradition Plan passed by the last General Conference.  But my own sense is that that opposition has been spoken with the church’s usually whispered voice, “Oh sure, we’re against not fully including LGBTQ people.”  We could speak up louder, stand with LGBTQ people stronger.  Does this church have to do it now?  No.  We could do what’s usual and wait until it’s safer.  But that would lead, again, to us joining in on a general, luke warm whisper—as usual.

I want you to know that in many ways I get it.  It’s normal not to want to take strong stands. But there’s more.  I know we also come to consider a church a family, and, of course, there’s two things we’re warned never to talk about with family: politics and religion.  It’s strange, isn’t it, that we don’t even really want to talk about religion in a church!  We’re afraid of splitting the church, but that’s because we haven’t yet learned to live with diversity.  This church in particular prides itself, rightly so, on its diversity.  But diversity means more than just diversity of race, ethnicity, age, and the like. It’s diversity of opinion, too.  Most of us want to be in a church where we believe everybody thinks alike.  That’s more comforting, certainly, but that’s not really a vital church.  It’s a cult.  The great historian Doris Kearns Goodwin wrote a book on Lincoln titled Team of Rivals.  It was his genius, she says, to put diverse, conflicting views in his cabinet.  We need both people in this church: those who oppose becoming a Reconciling Church, and those who favor it.  I favor it, but I’ll be here no matter what the outcome is.

I urge a yes vote because I believe unless more churches speak up louder now, take stronger stands now, it’s possible we could be talking about full inclusion years from now.  But unlike racism or sexism, I think our society as a whole—and especially its young people—have already largely moved on in terms of LGBTQ+ inclusion.  They’re for it and don’t see what we’re fussing over.  So when society—and especially its young—see us still arguing inclusion years from now, the church’s weak stand will make it seem to more and more people that we have not just a weak voice, but an irrelevant one, too.

♦  OTHER SERMONS (most with VIDEO):  “Pentecost Means No ‘Supremacies,’” “Sacred Doing,” “It’s Not What You Know But Who You Know,” “Elijah: The Growth of a Prophet,” “Searching for Prophets,” “Three Things to Stop Saying,” “Who Do You Stand With? A Sermon for Transfiguration Sunday,” “How Holy Was Jesus?” “Servants Know First,” “Everything’s OK?” “The Quiet After Easter.”

♦  Go Here for the Lead Post in a series of articles on the Unpacking Racism Laity Convocation.